While we all love the romance of packing up, leaving everything behind and hitting the road, let’s be honest, having a TV in your caravan or motorhome is pretty nice. Whether for watching movies on a rainy day, entertaining bored kids or just keeping you company while you cook, a good set is a nice comfort.

To ensure you get great coverage everywhere, a motorhome satellite system, either manual or automatic, is a must. While a manual set up is much cheaper and just as effective ad an automatic satellite antenna, it does take a lot more work every time you want to get it ready. An automatic system definitely comes in handy for you if you are tired of setting up your tripod satellite system.

In this article, we want to take a look at two of the most popular automatic satellite tv antennas, the Selfsat Snipe Dome vs Selfsat Snipe V3.

Are you in a hurry? Here is our top pick

Selfsat Snipe V3 stands out as the best though it costs more than the Snipe Dome. First, the Snipe V3 comes with 10 pre-programmed satellite positions while the Dome comes with 6.

It has a triple-layer antenna and a wave guard horn array, which helps in a stronger output. The horizontal and vertical signals are separated from one another and spot on the LNB.

The unit has a compact design that enhances its mobility. It also has coverage similar to that of a 60cm dish. 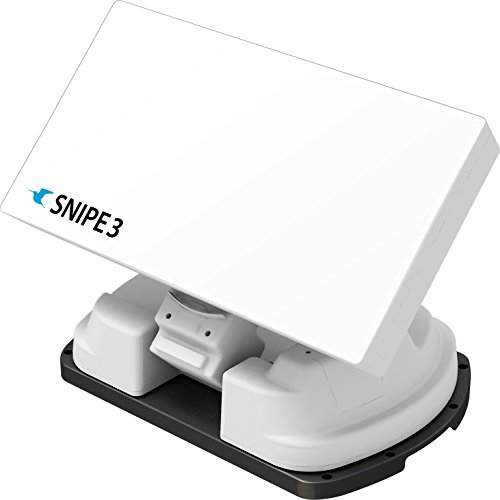 When you are looking for an automatic satellite antenna, convenience is a key factor for consideration. It should be effortless to install and have minimal alignment issues in a new location. Selfsat Snipe V3 (or Avtex Snipe) is the smallest automatic satellite antenna. Thus, it is easy to mount on the roof of a motorhome and it takes up very little space. Its compact size means it’s easier to install and portable.

It comes with an integrated GPS module and an electronically controlled drive. As such, with just a touch of a button, the antenna will automatically align itself.

As long as there is the availability of the respective satellite, you can watch your program even when you are on the go. As soon as you start the motorhome or turn off the receiver, the Selfsat Snipe V3 will automatically engage.

The Selfsat Snipe fully automatic satellite antenna features a reinforced plastic material. It is lightweight, which enhances its mobility and installation. The plastic material also makes it rust-free so that it can last for long.

Despite its compact size, the fully automatic satellite offers a very good reception. It has a three-layer antenna structure with a wave guard horn array. The feature prevents the reflection of the satellite signal. As such, you and your kids can enjoy watching your favourite program with no noise.

The signal strength is further enhanced by the separation of the vertically and horizontally polarized signals which are directed to the LNB. As such, you have a high signal strength at the LNB so that you enjoy watching your tv even while on the go.

Additionally, the automatic satellite antenna comes with 10 pre-programmed satellites. It also allows you to add two more satellites if you want.

When it comes to reception output, Selfsat Snipe V3 stands out as one of the best. The output can be compared to that of a conventional 60cm dish.

As you travel in your motorhome, a traditional satellite is prone to damage due to the rocking of the vehicle. This is not true for the Selfsat Snipe V3, which comes with a secure locking system that keeps it firmly in place. 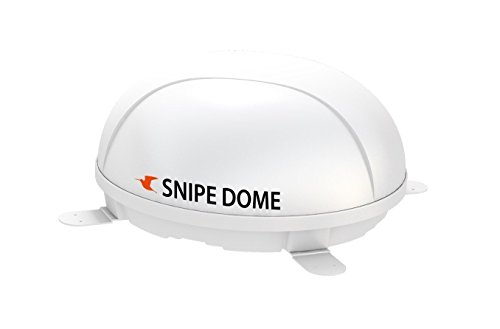 The Selfsat Snipe Dome features a compact and futuristic design, making it highly mobile and easy to install. It has a height of 30cm, which gives it a flat and aerodynamic design.

When not in use, the Selfsat Snipe Dome is protected by a plastic dome. The Dome has a reinforced plastic construction, which makes it sturdy. As such, the satellite antenna is protected from damage when it is raining and other weather conditions that might be destructive.

Additionally, the Selfsat Snipe Dome comes with 6 pre-programmed satellites. Also, it has three satellite positions that you can add manually. It also features an automatic satellite search function. With its built-in GPS, it automatically searches and aligns itself at the touch of a button.

The streamlined design of the Selfsat Snipe Dome makes it ideal for mounting on the rooftop. It also has a reliable locking system, which gives it a firm grip when you mount it on the roof. As such, you have no worries about the satellite antenna falling off or getting damaged as you drive.

You can get the Selfsat Snipe Dome in two versions. The first is the single version, which is for one satellite receiver or TV with a single line out for a DVB-S2 tuner.

The second is known as the twin version, which is for two satellite receivers or two TVs with DVB-S2 tuner. This means you can watch completely independently if you have multiple devices to watch on.

The automatic satellite antenna is famous for its ease of installation, and it comes with a user manual to guide you in the installation process. The Selfsat Snipe Dome comes with a three-year warranty. The warranty gives you the assurance that it is a high-quality item.

Selfsat Snipe V3 and Selfsat Snipe Dome are similar in a variety of ways. For instance, the two automatic satellite antennas come with a pre-programmed satellite. Thus, it becomes easy to search for programs. They also come with additional positions for satellites so that you can add manually, depending on your need.

The pre-programmed satellites, coupled with multi-search frequencies, make it possible to search satellites within a short period.

Additionally, they both come with a compact design. This makes their installation fast and effortless. It also ensures that they take minimal space when you install them on the roof.

If you are tired of the satellite antenna’s manual alignment, the two Selfsat products are ideal for you. The two automatic satellite antennas feature a built-in GPS and an electronically controlled drive. Thus, the alignment in a new location becomes effortless as they align at the touch of a button.

If you buy either of the two Selfsat automatic antenna products, you are assured of durability. They both have a reinforced plastic construction that makes them sturdy. The plastic material is also waterproof, which protects the satellite antenna from damage by rain.

Also, there is a difference in the design of the two satellite antenna. As much as the two have a compact design, they have a difference in terms of construction. For the Selfsat Snipe dome, it covers the antenna and provides a protective cover against rain.

The Selfsat Snipe V3, on the other hand, has a reinforced plastic construction with a drainage system.

Additionally, the Selfsat Snipe V3 offers an excellent reception. It features a three-layer antenna and a wave guard horn array, which enhances signal strength resulting in a strong output.

The other difference between the two is in their pricing. The Selfsat Snipe V3 is pricier than the Snipe dome.

The Selfsat Snipe automatic antenna is for you if you are tired of the manual setup of the tripod.

Of course, it is far cheaper to go the manual tripod set up way. However, an automatic satellite antenna comes with a lot of conveniences.

Imagine you have been driving all day and you just want to kick back, relax, and put on the movie. It’s cold and rainy, unpacking and aligning a satellite dish would be the last thing you want to do.

Bur, the Snipe 3 and Snipe Dome come with an integrated GPS and electric drive. Just turn them on and the units will align automatically with the touch of a button while you put the kettle on.

But, once again, just like the Maxview VUQube 2, the price difference isn’t small, so it is a hard choice. I guess it all comes down to if you can afford it, it’s a nice luxury, but that’s it. New tyres are essentail, so while I love these products, they are not really essential, so in summary, a great product if you can afford it.